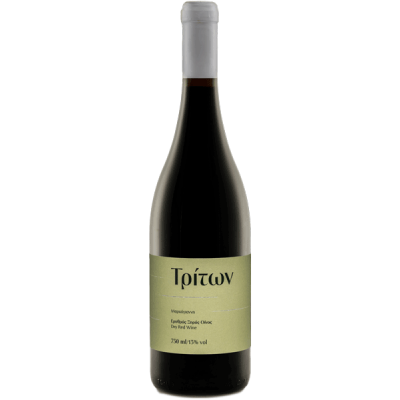 Giannis and Antonia Christopoulou created the Markogianni estate as a tribute to their grandparents, who have been cultivating vines since 1982 in the area of Ancient Olympia and they have been producing quality wines and spirits, using rare indigenous varieties. After the beloved Diagon and the pioneer Orange, their new venture is a dry Mavrodaphne from the Tsigello clone, Triton.

It is named after the river Triton that flows into the Alfios river, close to the winery. Deep, almost violet colour, with aromas of red fruit, berries and forest fruit on a background of sage and thyme, along with round, well-integrated tannins. The wine matures partly for a few months in used French oak and emphasis is placed on the primary aromas, the flowers and fruity character of the variety. The result justifies both the Markogianni Winery and those who have been working on producing dry Mavrodaphne. Ιn a production of just 1600 bottles, it's a new expression of Mavrodaphne, that also brings out the terroir.

Dense black color and a lively sensation of wood on a rich and warm nose with emphasis on aromatic herbs such as oregano and sage, sweet spices, cherry jam, sweet olive, chocolate and black pepper. Mo..

16.20€
Add to Cart
Add to Wish List
Compare this Product

15.50€
Add to Cart
Add to Wish List
Compare this Product

Since the legislation does not allow the 'Mavrodaphne' variety to be indicated on the label when the wine is dry, the producers are choosing relative names. Here we have the word "Tsigello", which is ..

14.40€
Add to Cart
Add to Wish List
Compare this Product

Straw-yellow color with grey highlights. Impressive nose with intense aromas of vanilla and tropical fruits. Full and creamy mouth, in which the pineapple and tropical aromas are perfectly embodied wi..

Golden-yellow color and a soft mouth, that create a bouquet of citrus, fresh fruits and lemon flower. Long and pleasant aftertaste...

Selected grape marc by the family vineyard (mainly Roditis, Mavroudi, Asyrtiko, Moschato) after wine-making for the production of quality wines are fermented with controlled fermentation and then main..

13.90€
Add to Cart
Add to Wish List
Compare this Product

Golden-yellow color and a soft mouth, that create a bouquet of citrus, fresh fruits and lemon flower. Long and pleasant aftertaste...

11.80€
Add to Cart
Add to Wish List
Compare this Product