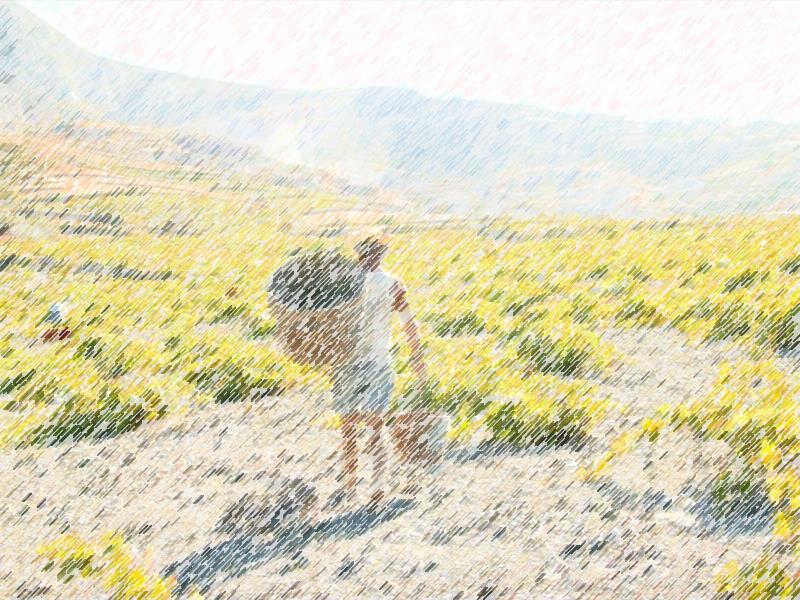 This very common ancient Greek saying is one of the most frequently wrongly used, as it is often misinterpreted.  We often tend to believe, that to reap and to harvest is the same as to go to war, a chaotic situation where the danger of defeat is always lurking. Scholars lean towards the interpretation that these three words equally require the maximum effort of the community, in order to face the challenges that all three represent.

This brief philological analysis does not have much to offer to the “wine people” who are either lucky enough to be enjoying their holidays or are wise enough to have started sharpening their trimmers. Truth be told, the circle of life of the plantwhich is cultivated, defines the procedures of reaping and harvesting both. So if during reaping season the wheat needs to be taken before it breaks and falls on the ground or is eaten by birds, during the harvest time, things get a little bit more complicated.

In a harmonic vintage, the grape, right before it is harvested, has accumulated enough sugar, which will later turn to alcohol. At the same time acidity has decreased due to sugar. Let us not forget that all fruits are sour at the beginning, in order to prevent being eaten by animals, and end up sweet as the pips, the seed that will enable the plant to multiply, are ripe. During this vintage the wine grower and the oenologist will choose when the time is right to swiftly harvest the grapes.

But because this world is not heavenly made, and because the climate change the past years has made the weather rather hostile against the agriculture, this means that, as the harvest date approaches, every piece of machinery and every worker is on their toes and up and running.

Let us begin with the temperature…

A high temperature during the maturation season and especially during the last days can affect both the grapes’ characteristics and the date of the harvest. Some varieties have such a steep maturation that the desired ripening point can be lost in a matter of hours. For the early ripening varieties that are harvested in the beginning of August, the most important factor is the August summer breeze. If the summer breeze starts before the harvest it ensures a smooth maturation and allows the wine to maintain it’s freshness. On the other hand a late arrival of August’s breezes will produce much “warmer” wines, just like the ones of 2012.

Another factor often getting on people’s nerves is rain, and the damages caused by it. When the grape reaches ripening, its skin tends to soften, which may result in tearing, should it be exposed to the rain, and rotting. But even if the skin holds, the grape, that was going through a dehydrating procedure, which was aiding the sugar concentration, is now soaked in water and will be harvested fearing that it may produce diluted wine. It is a common dilemma for the wine makers, when they see rain approaching, to either harvest before the rain grapes that have not yet matured, or after the rain in fear of rotten grapes. 2015 was a year that made things easier for all the wine makers since the rain, throughout the Greek region, started sometime halfway through September and lasted till the end of October.

However neither the climate nor the environmental difficulties are the hardest difficulties to cope with. Nothing can be compared to the hordes of friends and wine lovers visiting the wineries during the holiday season, as each “arriving bearing good intentions” wine lover needs to satisfy his curiosity (as he is entitled to). At the same time the winemaker is asked to both see to his quests and also overlook the winemaking procedure, the tanks, the press and the late arriving, in desperate need of wine business partner. That’s when all hell breaks loose.

Now under no circumstances should these line be misinterpreted as an attempt to discourage the wine lovers from visiting the vineyards on the holiday season. After all it is no ones fault that summer holidays and harvest season align.

On the other hand let us wish a smooth harvest to all the wine makers throughout the Greek region and to remind them of another Greek saying that says:
“Others trim and dig the land
..and others drink and end up drunk”

Have a good harvest everybody!