Sailing down the wine dark sea

How hard can it be for modern Greeks, as well as foreign scholars, to solve an almost 3000 years old riddle? For those who have chosen to cross the seas by boat to get to their vacation destination this summer, this riddle will show up on the waves’ foam while they will be gazing the sea’ s blue colour. 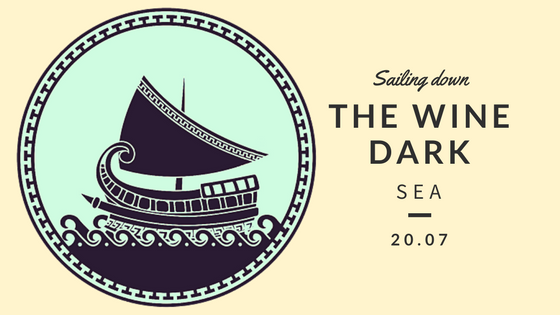 While it may seem distant and unequal, Homer sets the ever-wanderer Ulysses on the same water, gazing himself the blue colour od the sea from his ship’ s gunwale on his way to Ithaca. However, the ancient bard, who possibly travelled as well by boat through the Greek seas, offers a different description on the sea’ s colour from what we all have in mind. From the very first lines of Odyssey, Homer recites that the hero sails down the “wine dark sea” (epi oinopa ponton). This verse is often repeated throughout Odyssey raising questions in all modern scholars of wine history, and, to this day, is still an unanswered riddle.

Over the past 150 years, a lot of the secrets of wine have been revealed and now constitute common ground. Many researchers have used this knowledge in order to cast away the haze of time, covering with mystery the production of wine in ancient Greece. Despite science’ s achievements, the question still remains: what kind of variety or method could have been used to produce a red wine whose colour was compared with the colour of the sea as Homer describes?

Acknowledging that viticulture in the Aegean and Ionian islands is a continuous – historically – tillage, it would not be daring to say many of the varieties that are present today on the islands have originated from Homer’ s time. Thus meaning, the first attempt to interpret the riddle would be the search of that specific variety, growing in the Aegean and Ionian islands, that could ascribe such a deep violet colour to the wine. Avgoustiatis, Vertzami, Kotsifali, Liatiko, Limnio, Mandilaria and Mavrodafni give from garnet to purple coloured wines, yet none of them resemble the colour of the sea, so the explanation must lie elsewhere.

Another interpretation that many scholars espoused occasionally but not adopted massively, was the philological approach of the riddle. The bard likes to perplex things given that throughout Odyssey he often describes the wines that are being consumed. So, he recounts drinking sweet wines with their colour ranging from red (erythron oinon) to deep dark brown (aithopas oinos), but in no case deep blue.

A further problem the scholars must surpass is the ancient Greek tradition that depicts Homer as blind, making every attempt of verse interpretation even more difficult. Some readings conclude that the “wine dark sea” is some poetic technique that served Homer in his recite. Others refer to the proverb as the delineation of the calm sea that was taken as a sign for a safe journey. Some scholars decided to travel by boat through the Greek seas to be able to witness with their own eyes Homer’s lyrics. They are responsible for the theories relating to the water’s colour on the point where the seas merge, and with the purple colour of the sea when the sun sets and dives in it. What both theories ignore is the saying “the sea is blue, but the wind blackens it”.

A bolder explanation the present text espouses refers to the specific sociological characteristics that rule the seas that surround us since then. It is speculated that Homer came from the east side of the Aegean, with many cities of Ionia and Aegean islands wrangling over his origin. On the other hand though, Alcinous, kind of the Phaiacians on the island of Corfu, explains to Ulysses that there are no people like the Phaiacians, who are the best seafarers as well as singers and revelers. This undimmed spirit survives to our days and remains imprinted on the well-known Heptanesian song saying

“ [wishing] the sea were wine and the mountains savories

and the boats wine glasses for the revelers to drink from”

Could Homer have been influenced from this when he was describing the wine dark sea?

For those of you, who will be at the Aegean and Ionian islands, bear in mind that there are many choices from indigenous varieties to taste and savor. White and rose wines might be the undisputed kings of the Greek summer, nevertheless lightly cool red wines from the islands’ indigenous varieties could accompany harmonically your meals. For those of you who seek a summer reading, we dare you to find a case throughout Odyssey in which the wine being offered is not red.

Ulysses surely knew something, sharp as a needle as he was.

Special thanks to Greece’s eternal friend, Eckhart Koch, for his incitement to read Odyssey again.